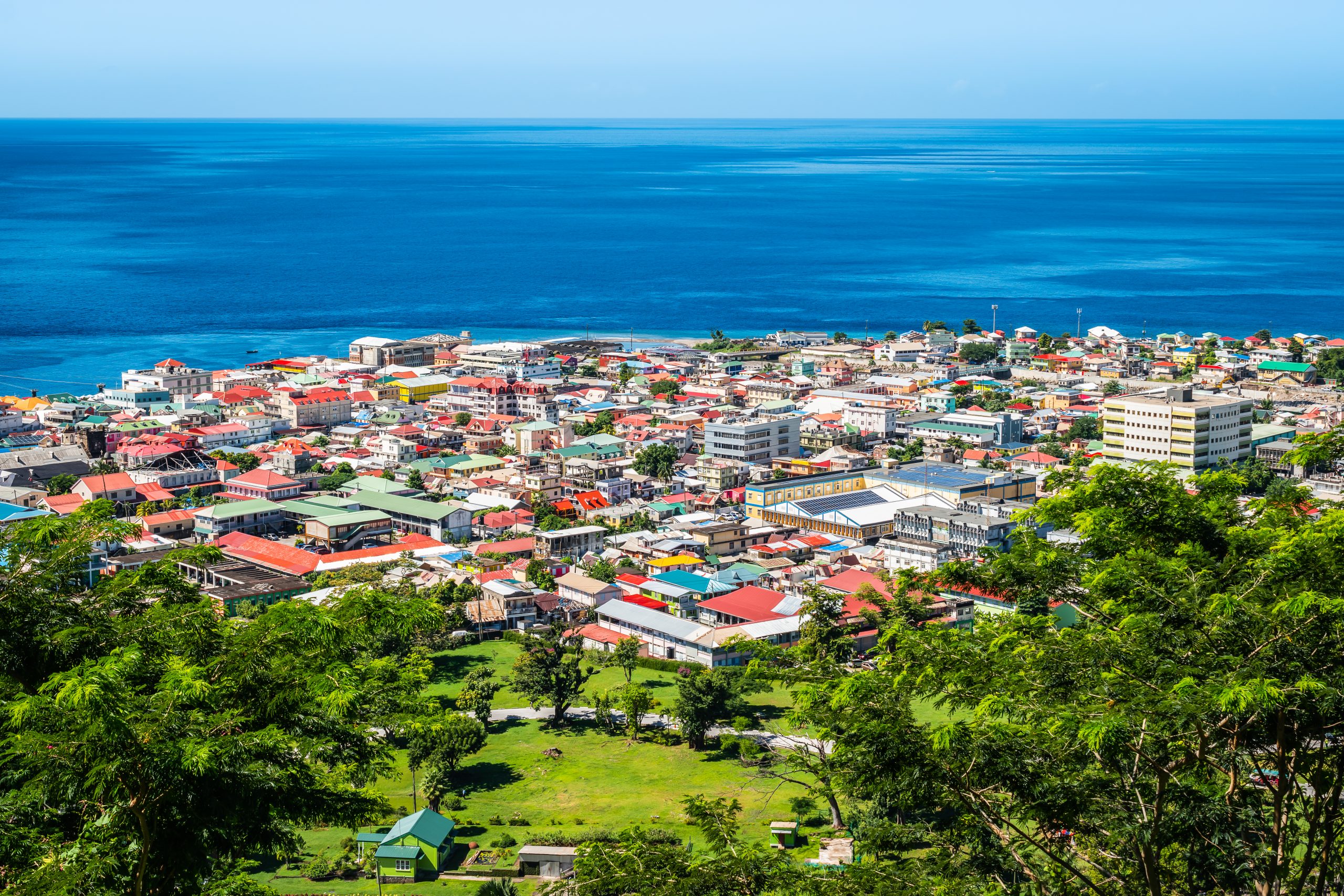 Dominica is a Manhattan-sized Caribbean island sandwiched between the French overseas territories of Guadalupe and Martinique, Dominica is an alluring, pristine country that is both livable and secure. For foreigners seeking a closer relationship with the island, Dominica offers nationality to eligible applicants through its citizenship by Domnica citizenship investment program. In exchange for monetary investment in the country, participants will receive a Dominica passport and all its attendant benefits- including low taxes, increased travel mobility, and visa-free access to over 100 countries and territories around the world. While the Dominica CBI program does not require participants to live in the country, recipients of economic citizenship may choose to relocate to the island after exploring the unique economic and lifestyle advantages of residency. If you are already intrigued by the multiple economic and travel benefits of a second passport, read on to discover what else this unforgettable island has to offer!

Volcanic and densely forested, Dominica is tropical and usually hot, with plentiful rainfall and temperatures that hover between 22(°C) and 29(°C) year-round. The climate is therefore perfect for 12 months of comfortable suntanning on the island’s many beaches, most of which are rocky with dramatic black sand. Dominica’s iconic tropical seascapes, cliffs, and jungles were the settings to some of the most famous scenes in Disney’s Pirates of the Caribbean film franchise. The island’s abundant nature and wildlife are conducive to swimming, diving, sailing, hiking, and other outdoor pursuits. Tourists and visitors alike enjoy visiting the country’s famous Boiling Lake (only Frying Pan Lake in New Zealand is larger), reachable by a challenging 8-mile hike. The springs are located on Mount Trois Natural Pitons Natural Park, a UNESCO world heritage site described as having the most significant biodiversity of all 24 islands comprising the Lesser Antilles. Encompassing 7,000 hectares of naturally occurring wonders, visitors to the park can explore its colorful forests, hidden waterfalls, and dramatic volcanos (Morne Trois Pitons is the country’s highest at 1,342m).

Known as the “Nature Island of the Caribbean,” Dominica is home to three national parks and numerous other forest reserves and protected areas. The country’s unspoiled natural beauty is nurtured by the government, which has worked to establish a balance between tourism and the environment. Although the industry is growing, Dominica receives one of the lowest number of tourists per year (an estimated 75,000 overnight visitors) when compared to neighboring Caribbean countries. Because it’s less touristy than other islands, Dominica offers an uncrowded and more authentic Caribbean experience for residents and visitors alike. While its port is an increasingly popular destination for cruise ships, Dominica is not yet overrun with the massive hotels and other gigantic development projects that characterize many larger and smaller islands. Native islanders are notorious for being incredibly kind and helpful, happy to show visitors and newer arrivals the best their island has to offer.

A culturally creole, majority Christian country, Dominica hosts the World Creole Music Festival every year. The three-day event, which was first held in 1997, is a celebration of all things creole and draws audiences of up to 10,000 people. Other musical styles that are endemic to the island include Jing Ping, a song and dance developed by Dominican slaves accompanied by the accordion. The island’s complicated history and creole culture is sensitively explored in two novels; the Wide Sargasso Sea and The Orchid House; both famous works written by Dominicans. While most of the current islanders are descended from slaves, the country maintains a population of several thousand Kalinagos-indigenous peoples native to region long disappeared from most neighboring Caribbean islands.

Creole in nature, Dominican cuisine is also British and French-influenced. Using a combination of domestic and imported ingredients, the island’s delicious restaurants create flavorful dishes with freshly caught fish and locally grown fruits and vegetables. Prior to the near-extinction of its main ingredient, the country’s national dish was “Mountain Chicken”-not chicken at all, but a species of frog native exclusively to Dominica (now a protected species, Chicken frog was replaced by Calalloo Soup as the island’s national dish in 2013). Dominica is also famous for its locally produced rum, served throughout the island’s many beach-side bars.

Cricket is the most popular sport on Dominica, which hosts a multi-million dollar stadium capable of seating over 7,000 spectators. Fans of the sport (and of football, which is becoming increasingly popular) can read about their favorite teams in the country’s two major newspapers or watch live matches on the two national TV stations.

Cost of Living in Dominica

The cost of living in Dominica is low in comparison to many other regions and countries around the world. Dominica shares the East Caribbean Dollar (which is pegged to the USD) with 6 other island states. While the island’s imported products can be somewhat costly, the island’s low prices for housing and most major services, including housekeeping and childcare, make up for slightly inflated costs for certain goods. Additionally, most healthcare services are free, with zero costs for primary care, and no-costs medical services for young people and pregnant women.

The official Dominica language is English, although French and a form of creole-French are also widely spoken by locals on the island. Instruction in all the public and private schools and universities is in English.

Cities in Dominica are limited due to the country’s small population size. The country’s oldest, largest, and most vibrant urban center is its capital Roseau. With a population of just under 15,000, Roseau is significantly larger than any of the other major towns in Dominica. Located on the Caribbean (western) side of the island, Roseau is the seat of government and the location for most official administrative buildings and facilities. The site of Dominica’s largest port, it is also the entryway for the majority of the country’s imported goods and trade infrastructure. Home to the island’s most sophisticated and vibrant restaurants and nightlife, the capital is dotted with gracious French colonial buildings and the vintage Fort Young Hotel-the island’s most famous. Visitors to the capital can also explore the Dominica Botanical Gardens; one of the loveliest and most comprehensive in the region.

One of two ways of securing economic of Dominica citizenship is through the purchase of real estate on the island. Qualifying candidates can choose from among a number of pre-approved houses and plots are set aside by the government, available for purchase through the country’s citizenship by investment program. If you decide to purchase a home in Dominica via the CBI program scheme, you can browse and ultimately purchase available properties online without ever setting foot on the island.

If you have children and are thinking about relocating to the island, you may be wondering about the opportunities for study in Dominica (the universities in Dominica and schools in Dominica). Dominica has a number of private and public pre-schools, grade schools, and high schools throughout the country, as well as two public universities. The first- the University of West Indies, which operates throughout 17 countries in the Caribbean and is the top-ranked university in the region is the largest institution of higher education in the country, offering remote learning and face-to-face instruction for students on the island. The second is Dominica State College, which has a student body of around 1400. In addition to UWI and Dominica State, there are a number of private colleges on the island, including the All Saints University School of Medicine, which is administered from Canada.

If the above has piqued your interest in living in Dominica, you can pursue citizenship through the country’s CBI program, which offers two pathways to economic citizenship. Those interested in obtaining a Dominica passport can either purchase real estate on the island or make a donation to the country’s national fund. The minimum costs for both options are 100,000 and 200,000, respectively. For more complete information on costs or for general information about achieving a second passport and living in the Caribbean, please contact our experts at Guide Consultants.